You are here: Home / Archives for RINOs 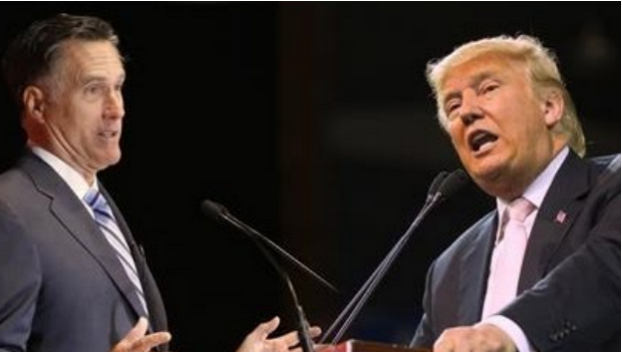 The new leader of the anti-Trump resistance in the Senate, Mitt Romney, will take the oath of office January 3. The former Massachusetts Governor and failed GOP presidential candidate represents what could be called the reemergent Rockefeller wing of the GOP.

You may recall that Romney delivered the most scathing anti-Trump speech by a Republican during the 2016 election cycle, calling Trump a “phony” and a “fraud.” Romney wrote in his wife’s name on Election Day 2016 rather than vote for Trump. He has said that he is not ready to endorse the president for reelection in 2020.

After Trump was elected, Romney was summoned for an interview for a position of some kind in the Trump Administration. Romney even got a follow-up interview with President-elect Trump. “Romney got played,” one journalist noted. It was payback. When nothing materialized, Romney went to Utah to plot his political comeback.

One day after we recorded our new video, “Can Trump Survive Until 2020?,” which looks at the background of Never-Trump Senator Romney, we noticed with interest that an anti-Trump Washington Post journalist by the name of Jennifer Rubin wrote about how Romney is “the ideal person” to fight Trump’s agenda in the Senate. The liberal writer said Romney “has a chance to begin his party’s revival, contain a lawless president, and prevent domestic and international calamities.” She explained, “The Senate has a principle, sanity and gravitas deficit created by the passing of Sen. John McCain, R-Ariz., and enlarged by the retirements of Sens. Bob Corker, R-Tenn., and Jeff Flake, R-Ariz. Romney is the ideal person to fill that void — perhaps the only one who can. But he doesn’t have to operate solo.”

She went on to suggest that Republican Senators Thom Tillis of North Carolina, Joni Ernst of Iowa, Cory Gardner of Colorado and Susan Collins of Maine “can be enlisted in an effort” to stall Trump’s agenda.

Of these, Collins is already a power-broker, having cast the deciding vote for Supreme Court Justice Brett Kavanaugh. He promised her that he would be defer to previous Supreme Court decisions on abortion and gay rights, and he delivered with his recent ruling in favor of Planned Parenthood. Gardner made a name for himself by stalling various Trump nominees in exchange for a promise to accept legalization of marijuana on a national basis. Gardner’s marijuana bill is co-sponsored by Democratic Senator Elizabeth Warren, who just entered the 2020 presidential race.

Republicans such as those listed by Rubin and led by Romney could help make an impeachment conviction of Trump a strong possibility in the new Senate. We should remember that one version of Nixon’s fall from office, as detailed in Gary Allen’s famous book, The Rockefeller Family, was that members of Congress, financial interests, and others associated with the wealthy Rockefeller family maneuvered to force the resignation of President Nixon. After Nixon resigned under threat of impeachment, Vice President Ford was sworn in as President and named Nelson Rockefeller as his vice president. Rockefeller had unsuccessfully sought the Republican presidential nomination in 1960, 1964, and 1968.

On the most recent edition of our America’s Survival TV show, investigative journalist Steve Baldwin described Romney’s record of fake conservatism and how he could posture as a reasonable Republican. “He portrayed himself during his campaigns as a conservative,” Baldwin said of Romney, “but his record as governor [of Massachusetts] was very, very weak. In fact, he led the country on three of the left’s most cherished issues — cap and trade, gay marriage, and socialized medicine. Some of this legislation served as a model for national versions of those same policies. He really is the leader of the RINOs in America today. With the Senate barely under Republican control, Romney is now in a position to break off a few key senators and cause Trump trouble as Trump pursues an America First agenda.”

In an article headlined, “How Mitt Romney could wind up running the United States 6 years after losing the presidential election,” Elaine Kamarck noted, “Republican Senator Romney will have what no other Republican Senator currently has, a Republican constituency that does not like President Trump. Trump came in third in the Republican primary in Utah in 2016 and in the general election a large number of voters voted for the independent and Mormon conservative Evan McMullin, rather than pull the lever for Trump or Hillary.” McMullin, a former CIA operations officer, received 21 percent of the vote, compared to 45 percent for Trump and 27 percent for Hillary. 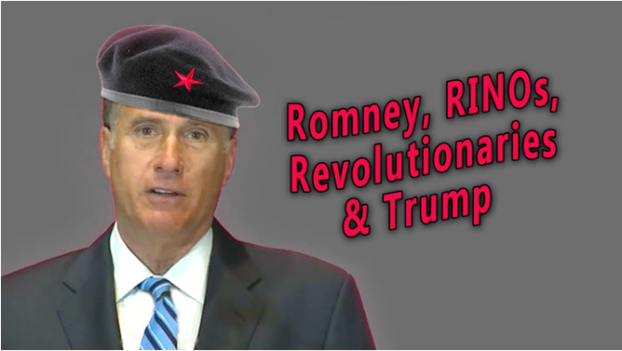 Baldwin, former California legislator and executive director of the Council for National Policy, wrote an entire book on Romney that was ultimately rejected by a conservative publishing house that was fearful of offending establishment Republicans. In one of the chapters, “The Buying of a Movement,” he alleged that Romney captured the 2012 GOP presidential nomination not only by falsely advertising himself as a conservative but by funneling donations from his family foundation to influential conservative groups.

Groups like my own America’s Survival, Inc. had published documentary evidence of Barack Hussein Obama’s communist connections back in 2008. Romney didn’t win the GOP nomination in that year. But Arizona Senator John McCain, who did win the nomination, wasn’t interested in bringing any of that to the public’s attention. He lost an easily winnable race against Obama.

In 2012, when Romney won the nomination and ran against Obama, Joel Gilbert released a popular documentary “Dreams from My Real Father,” drawing on our material and going into substantial detail about Obama’s Marxist roots. Gilbert had argued that the right strategy to defeat Obama was to expose his Marxist views, including the role of communist Frank Marshall Davis in molding Obama’s political philosophy. But Romney and top Republicans disagreed. Karl Rove told Republican donors, “If you say he’s a socialist, they’ll go to defend him. If you call him a ‘far out left-winger,’ they’ll say, ‘no, no, he’s not.’” Rove said that Republicans had to “adopt a respectful tone” in criticizing Obama.

By contrast, Gilbert argued, “If Republicans had made Obama’s Marxist agenda and personal background the main issues of the campaign, Americans would have had a much clearer understanding of the choice between American values and Marxism.”

Romney has now followed-up his failed 2012 presidential campaign with a successful run for the Senate from Utah, the base of his church and its wealth. Mike Kennedy, a state lawmaker, ran against Romney and had tried to warn Utah voters during the primary that Romney was a carpetbagger and flip-flopper. Then, during the campaign, independent candidate Tim Aalders argued that Romney was actually a “progressive” who was out-of-step with conservatives.

Sam Bushman, host of the Utah-based Liberty Roundtable radio show, says, “I believe Romney is still young enough that he thinks he has another shot at maybe being president or staying long-term as leader of the Senate. He doesn’t care which as long as he maintains political power.”

At the current time, according to the latest McLaughlin & Associates survey, 72 percent of Republicans favor Trump in the 2020 race and only 9 percent back Romney. That suggests Romney’s approach will be to get accolades from the Washington Post and other liberal media by leading the anti-Trump Republicans in the Senate. After the Democratic-controlled House impeaches Trump, Romney could emerge as the Republican Senator arguing for Trump to resign for the sake of the Republican Party.

At that point, Romney could decide to run for president again. Or perhaps he would settle for the vice presidency under President Mike Pence. It would be a case of Romney’s revenge.